I’ve never been in a situation where every single day young people are coming in droves for prayer, surrendering their lives and their hurts to Christ with tears pouring from their eyes.

It’s happened absolutely every day here in Colombia. Today we were in a public high school and the class seemed a bit rougher around the edges to me than the other groups had. I didn’t know what to expect. However, as one of the team member’s shared the truly great news that God can renew us, and He died so we could be made alive in Christ, almost the entire room (with eyes closed- so no influence from friends) raised their hands saying they were ready to give the whole of their lives to Christ. Absolutely blown away!

Yesterday, something happened that I won’t soon be able to forget. We were actually at a Christian high school. A lot of the kids aren’t Christians and a lot of the ones who are have really deep hurts that we’ve been able to pray through with them. At the end of our presentation we give an altar call and invite anyone who wants to surrender to Christ and anyone with struggles that just need help to come forward. I noticed two guys sitting in the front row not with any of the groups praying, but they had their heads down crying. I kneeled in front of them and began to pray as best I could in Spanish. Their names are Erich and Stephen. I prayed for them and then asked, “What is God doing in you?” One boy in a very soft voice under his tears told me, “He’s cleaning my heart.”

I told him that I thought that’s exactly what was happening. We prayed and talked a lot more. I found out that they both have a lot family problems. One of their dads hurt his hand so can’t work. That leaves the family without money. Both of their dads had turned to drinking a lot and some of the violence that comes with that. Stephen’s mom works all night so when he gets home from school he doesn’t really see her. He feels so alone in life right now. On top of that are the usual teenage guy troubles that they have to try and work out. I felt God saying to make sure they knew their family situations were not their responsibility. “It’s not your fault.”

We prayed some more and I asked what God was speaking now. Erich let me know that God was telling him that He loved them and to trust Him. Stephen felt the same. I hugged them before they left and just reminded them that God really cares about everything in their lives and He will help them.

As they left, I went to the back of the room and did some crying myself. I wrestled with the Lord a bit saying, “It’s not fair that these innocent little kids have so much on their shoulders and so much pain.” God reminded me of how He’s brought me through my own issues and He’ll do the same with them. He’s close to the brokenhearted and He’ll remain close to those two boys and the hundreds of others who are meeting with Him this week.

Please be praying as tomorrow is our last day to minister and we’ll be doing three presentations in a school where God has moved so mightily with lots of kids meeting Him, being freed from sin struggles, and finding comfort from feeling alone and suicidal. 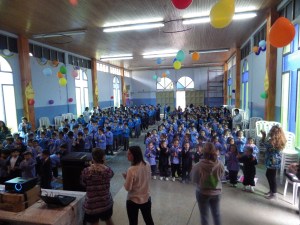 P.S.  I met some awesome teenage guys in a far out part of town today who had never eaten Mcdonalds=mind blown.

3 thoughts on “Not Easily Forgotten”